Arden, North Carolina (August 18, 2020) — Crossroads congratulates The McKameys and the Chuck Wagon Gang, who have both been nominated for GMA Dove Awards for their albums released last year.

The McKameys’ The Crown —  their last release after the announcement they’d no longer be touring full time — is nominated for Southern Gospel Album Of The Year. The Crown once again brought The McKameys’ anointed message of faithfulness and the power of the Gospel to the world, with songs like “From Dust To Glory,” “We All Need A Savior” and the current single, “God Is Good.”

“We are truly honored for our album The Crown to be nominated for a Dove Award,” say The McKameys. “We were truly surprised but humbled.” 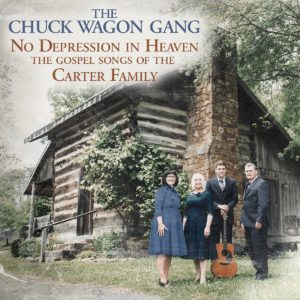 The Chuck Wagon Gang’s No Depression in Heaven: The Gospel Songs of the Carter Family is nominated for Bluegrass Album Of The Year. On this album, the group honors The Carter Family’s storied career, carrying on the American roots tradition of singing songs from the heart and telling stories of life’s struggles and what people turn to to get through them. With empathy, this music recognizes the human condition.

“It’s been such an honor to be part of this tribute to the Carter Family and we are thrilled and excited at its Dove Award Nomination,” says Shaye Smith, alto singer. “The entire team worked so hard to produce a tremendous project, which from its inception has really been a blessing to many folks.”

The wonderful harmonies of this family along with great songs gives them a unique opportunity to share God’s love as well as encourage the saints. Whether they are performing one of their classics like “Right On Time,” “I’ve Won,” “Unspoken Request,” “There Is Jesus,”  their signature song, “God On The Mountain” or a new release, there is an undeniable energy that carries them through each performance.

The McKameys have been awarded several different Singing News Fan Awards through the years and Ruben and Peg are also recipients of The Marvin Norcross Award and Norcross/Templeton Award, respectively. In 2016, Peg McKamey Bean was inducted into The Southern Gospel Music Hall Of Fame. This family group remains devoted to their Lord, first of all, and to their call to spread God’s Word to others through their music.

About the Chuck Wagon Gang
Although the Chuck Wagon Gang has been around since 1936 — undergoing many personnel changes over the years — its sound and devotion to old-fashioned gospel has remained much the same. Their greatest significance is that the band provides an important link between country music and traditional sacred songs of the South. This music, has moved Johnny Cash, Merle Haggard, Charlie Daniels, and generations of gospel singers and open-eared listeners. For more than 80 years, the Chuck Wagon Gang has offered hope and harmony, faith and family. Now in its third generation, the Chuck Wagon Gang features alto singer Shaye Smith, tenor singer Stan Hill, soprano singer Melissa Kemper and guitarist and bass singer Karl Smakula.